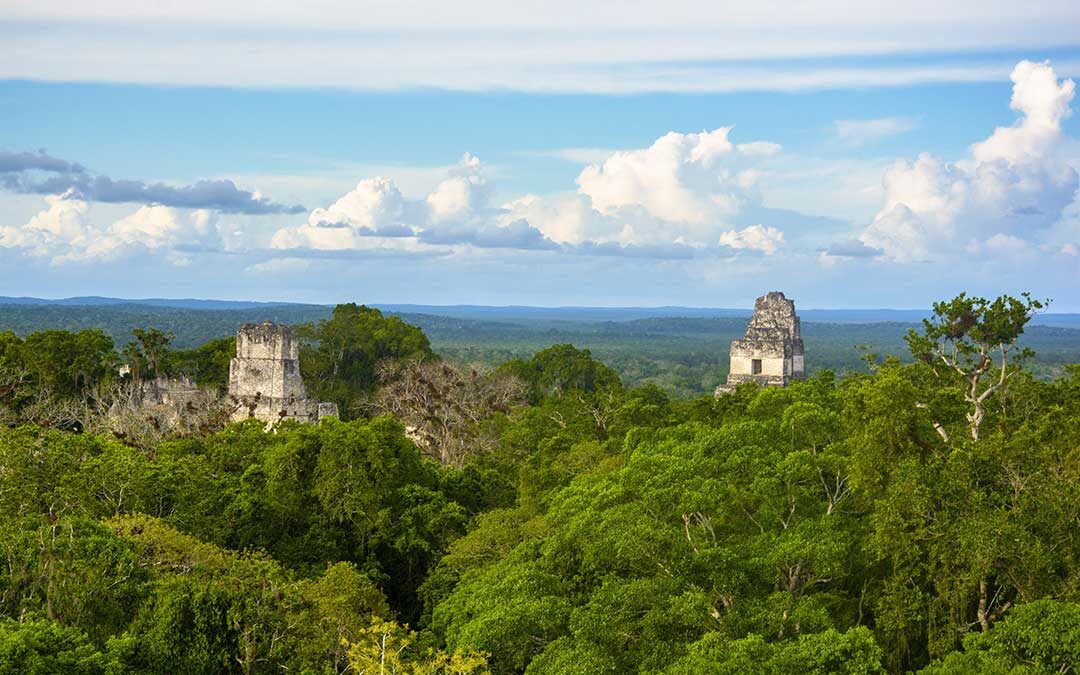 The ancient city of Tikal is located in the north of Guatemala, the center of the department of Petén. It is known as the “Place of the Voices.” Time has immortalized this place as a religious and cultural center, transmitting the messages of the ancient Mayans through the hieroglyphs carved in limestone, the unique architecture, and the remains of colorful ceramics.

In 1955 Tikal was declared a National Park and later acquired the rank of National Monument for its extraordinary cultural wealth and the immense variety of species of flora and fauna.

Following these parameters, UNESCO named Tikal a Cultural Heritage of Humanity in 1979. Later it was assigned the category of the nuclear zone within the Maya Biosphere Reserve, a vast region of northern Guatemala confined to the protection of nature and other archaeological centers of the Mayan civilization.

The area where the remains of architecture are found occupies practically the center of 576 square kilometers that embraces the Tikal National Park. Here, you can explore one of this Mayan metropolis’s most famous temples, pyramids, and palaces. In addition, you will learn about the protected wildlife, which includes mammals, birds, and reptiles, under the enormous variety of trees and plants that fill the rich jungle of the region.

The existence of this city became known in the modern world shortly after the first official survey of the Guatemalan government in 1848. It occurred under the direction of Colonel Modesto Méndez and Ambrosio Tutz, Corregidor and governor of Petén. Since then, researchers have come from around the world to study his remains, highlighting the names of Maudslay (1881), Maler (1895), Tozzer (1910), Morley (1914), and Shook (1937).

The first scientific project began in 1956 and was led by an archaeologist from Pennsylvania University.

Since 1964, the Guatemalan government has been involved in a temple restoration program in the central plaza and research on the Palacio de las Acanaladuras, the Mundo Perdido complex, the structures of the Zona Norte, and other areas.

As of 1991, a cooperation agreement was signed between Guatemala and Spain to conserve Temples I and V, which concluded in 2000.

Tikal is the monumental and most significant site in the Maya lowlands. The center has an area of ​​16 square kilometers, where more than 4,000 houses, palaces, temples, pyramids, ball courts, and training houses were built. It is estimated that it welcomed from 90,000 to 120,000 inhabitants in its most splendid time.

Its first inhabitants founded a small village around 800 BC and built two groups of houses. One in the area known today as “Lost World” and the other in the “North Acropolis.” Around 300 BC, Tikal was already considered a prestigious city in distant places. This was due to merchant visits and the presence of a centralized government with a ruler who held priestly power.

The time of great splendor was between 250-900 AD. When Tikal was ruled by great sovereigns, who extended their territory and borders, conquered new peoples, and increased their relations with settlements in central Mexico, Chiapas, Yucatán, Belize, and Guatemala’s highlands.

The heart of the site is made up of several ceremonial, administrative and residential complexes, which communicate with each other through wide avenues. Highlights include the North, South, and Central Acropolis, Great Plaza, Lost World, Seven Temples, Palace of the Grooves, Group P, Twin Pyramids Complex, East and West Plaza, which exhibit private sanctuaries, and residential palaces.

Other compounds have growing areas and “chultunes,” large holes dug into the calcite bedrock to store grains.

In Tikal, the stylized and tall temples stand out, complemented by crests that serve as an elegant termination for the highest part of its architecture. They are portraits of governors who ordered the construction of these buildings and were sculpted and displayed skyward to demonstrate their divine sovereignty.

Altars and stelae have been found throughout the site., along with plastered masks decorating the facades of buildings that convey ideological messages. The integration of the plastic expression of the mask with the architectural compounds is evident, and the use of paint shows a unique artistic dialogue.

In addition, there are open spaces for the squares, which formed a significant stage prepared to carry out political and religious events in the form of a massive theater for the Gods. Finally, the Temples and pyramids symbolically reprint the sacred mountains where the Gods create the world and the human being.

From these places, the Mayans, for centuries, observed stars for the perfection of solar and lunar calendars and the cycle of Venus.

Death and belief and life after death were fundamental to the Mayans. This is illustrated in the presence of offerings that accompanied the corpse. They consisted of stone tools and ceramic vessels containing food and drink to use on the long journey to another world.

These vessels reflect much of their culture and religious beliefs. The same goes for modeling clay and applying red, orange, black, cream, green, pink, white, and blue. It should be noted that the blue color obtained by the Mayans is unique in the world.

This is partly due to the extraordinary care of creating a great cultural treasure scattered throughout the rainforest.

This can be observed in the artifacts exhibited in the on-site museums, where vessels and ceremonial plates with religious scenes, dances, offerings, and others transmit messages and preserve an excellent plastic representation.

Tikal was abandoned after 900 AD, but it was not forgotten by the inhabitants who occupied the nearby villages when they arrived here to perform their ceremonies. Sometime in the 16th century, a woman was buried atop Temple I or Temple of the Giant Jaguar.

Historical accounts mention that Fray Andrés de Avendaño passed nearby in 1696 when he escaped from Tayasal, probably the first European to describe this place in his reports.

No comments to show.